Back to all posts

When we last left off, I was in Honolulu about to leave for New Zealand.  Well, much has happened since then, as I find myself once again in Honolulu awaiting my 11pm flight back to the mainland today.  Let's catch up, shall we?

Standing in line at security, it may have been the Hawaiian humidity but I could feel the beads of sweat forming all over me, creating a delightful aroma for the person i would be sitting next to on the plane.  You're welcome, my friend in seat 29B.  Flying to NZ has been one of the biggest goals of my life and here I was about to board a plane to that goal's end.  It was a long flight over the endless blue Pacific underneath, but finally we touched down in Auckland on the north side of the north island.  Shortly before I left, Brynn and I had dinner with a wondrous couple Angela and Doug who introduced me to Scottie Richie, an amazing artist living in Auckland who met me at the airport and thankfully drove us in the rental car back to his house.  At that time of night I wasn't quite ready to learn how to drive on the left side of the road.  Check out his artwork HERE. 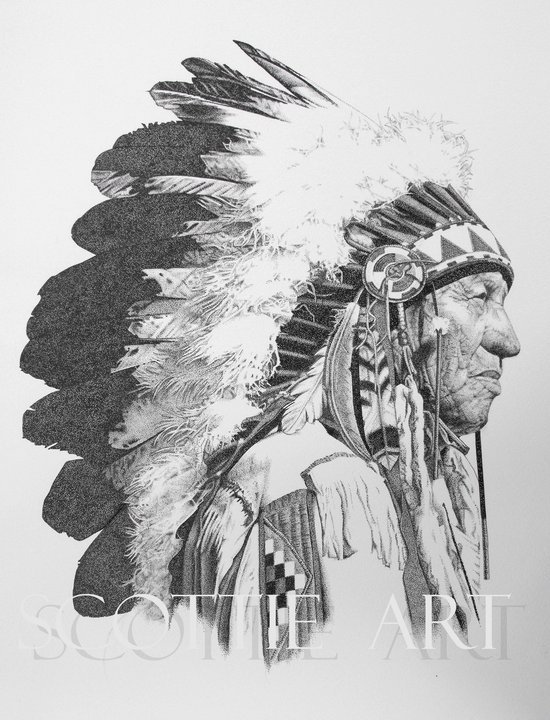 The big thing in the Pacific seems to be Karaoke.  It is an wide sweeping epidemic over there so without much hesitation off we went and before long, I mustered the gumption to sing some R.E.M. to all the kiwis.  It was a beautiful introduction, and I was given a warm welcome.  The hospitality of New Zealand was evident in the first person that I met, in the fact that Scottie gave up his bed so that I could get some good rest.  Thank you, brother!  Well, after a slow rise in the morning, a good breakfast and stocking up on some food at the store, I headed out in my rental car towards Hobbiton, the site of the Shire.


It was late when I arrived so I decided to pull over on the side of the road a mile before the film location.  I watched as the full moon careened over the sky illuminating a mysterious valley.  This is the view I awoke to... 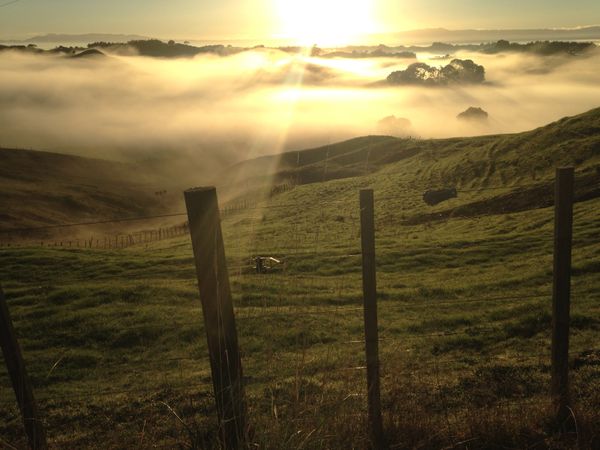 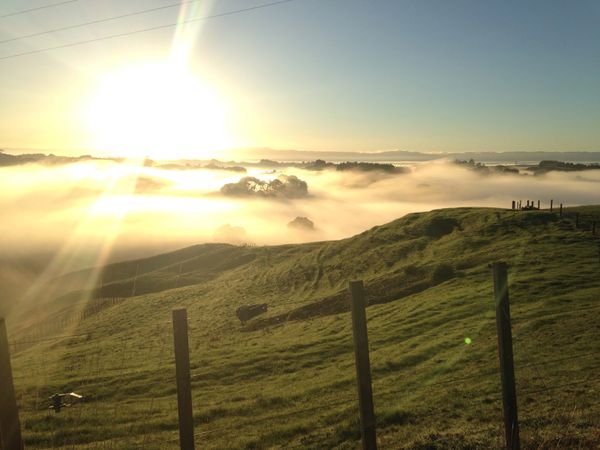 I could not help but burst into tears at the site of this sunrise.  It felt as if I was watching the clouds transverse over the Misty Mountains of Middle Earth.  Everything I had heard about New Zealand was true.  I am in awe of such creation and feel as if on this trip, I miraculously stopped in the right places at the right time as a mysterious gravity led me down the most perfect roads.  New Zealand had been waiting for me, as much as I had been awaiting her.  A quote I have always loved is "What you are seeking is seeking you with the same amount of conviction you push towards it."  This is true.  Life wants us to succeed, but we only succeed by the conviction of our thoughts and deeds.  Whatever we desire and put our whole being into achieving, wants us to achieve it as well, for the mere fact that life desires what we desire.  For it is in this achievement that we grow and become more of our actuality.

Pulling my jaw off the ground, I drove down to the Shire.  I was the first to arrive and as I sat there began talking with a family about our joy of being there.  The father, proud of his daughter relayed that she worked at weta as a visual artist and so one of the first interactions I had was someone associated with the studio.  I gave her a cd and wished her well.  Hope you enjoy it, Vanessa.  Tell me what Pete thinks!  =)  Signing up for the tour, we hopped on the bus and drove down to the site.  Here is what I captured: 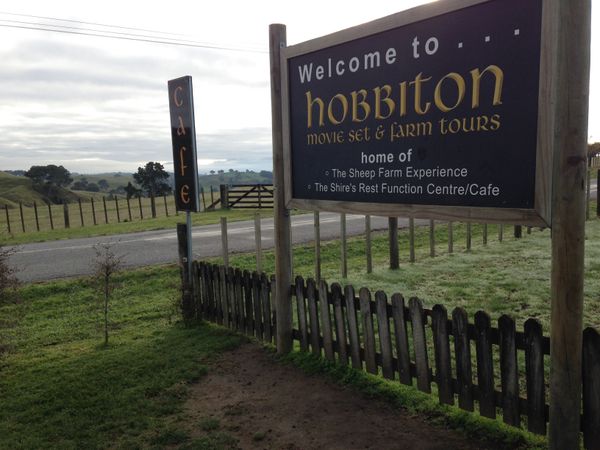 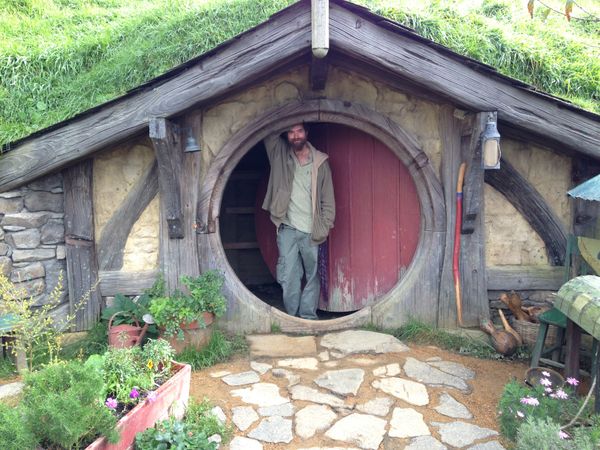 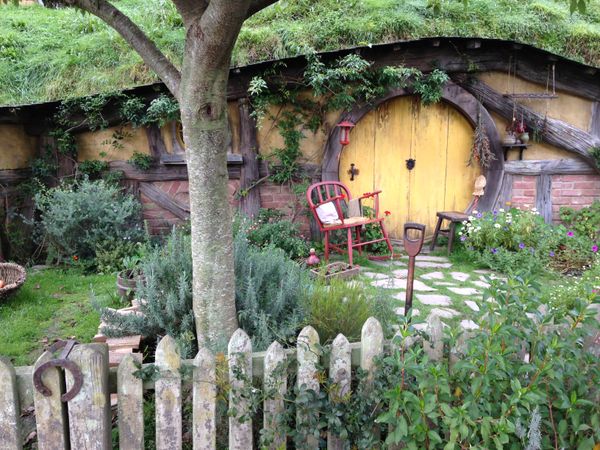 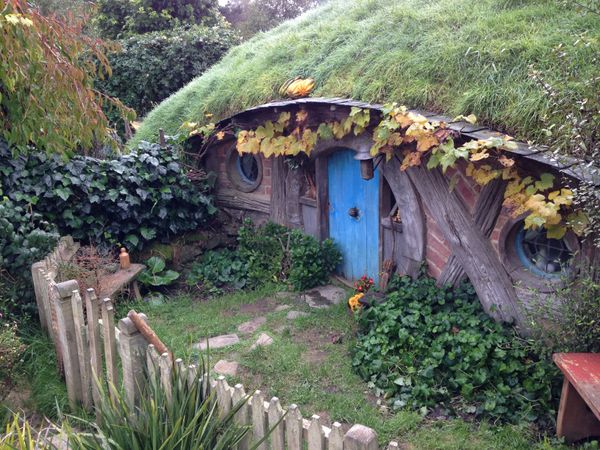 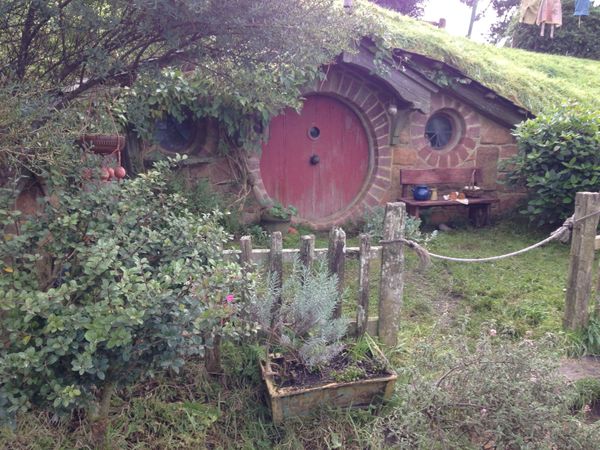 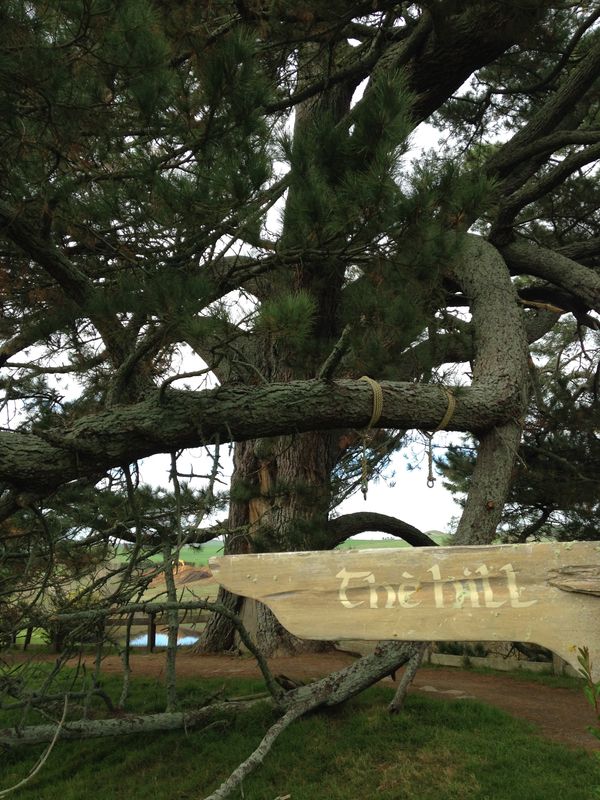 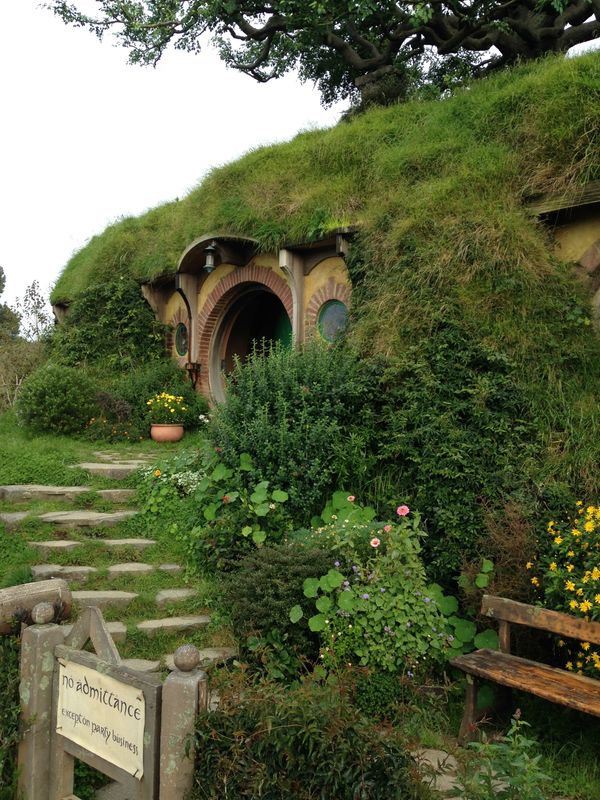 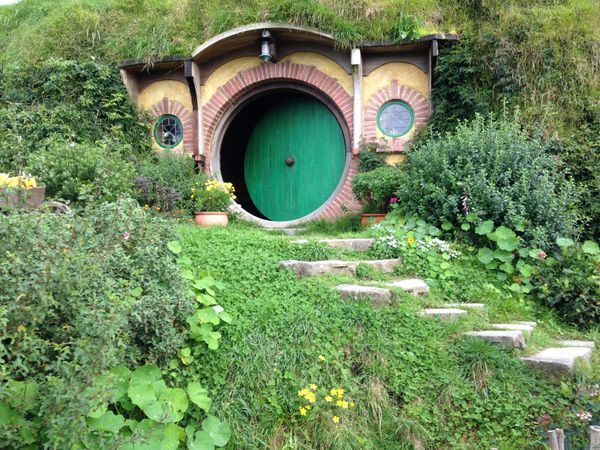 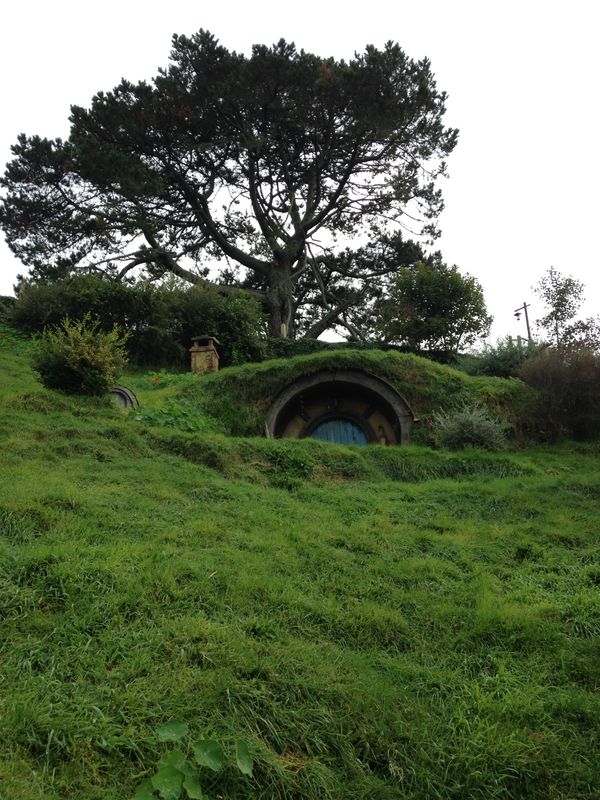 Samwise (Banazîr) Gamgee's house!!!  Unfortunately I couldn't fit a CD in his mailbox. 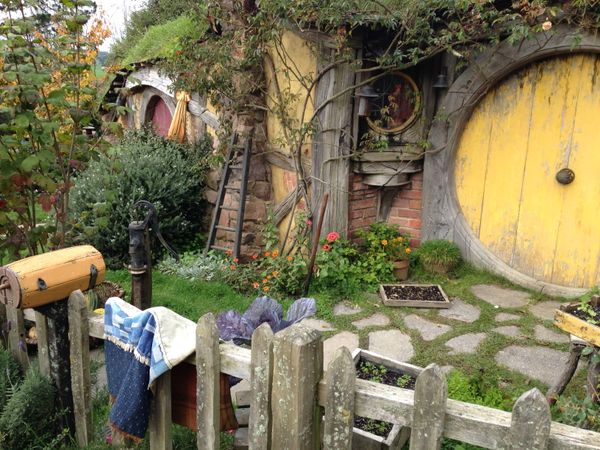 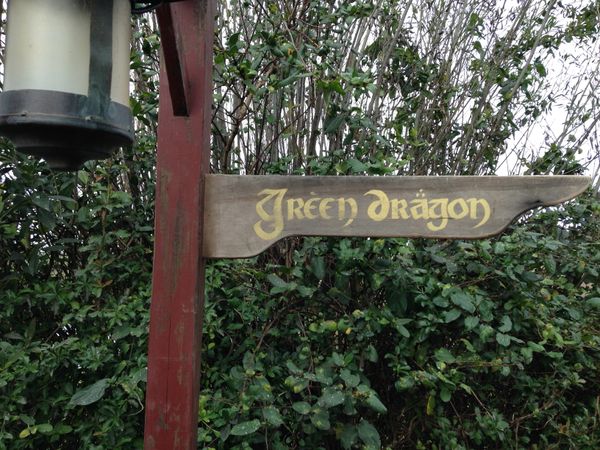 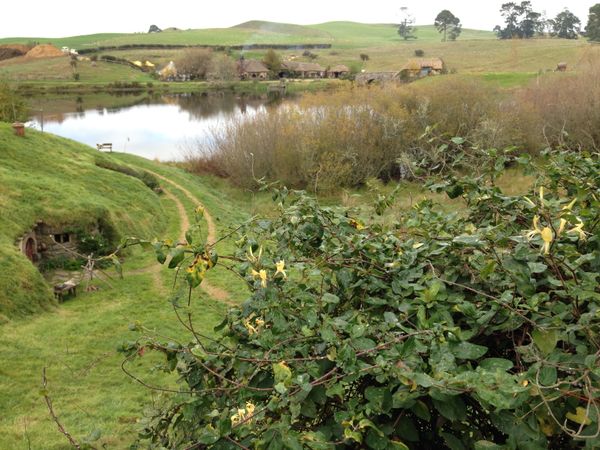 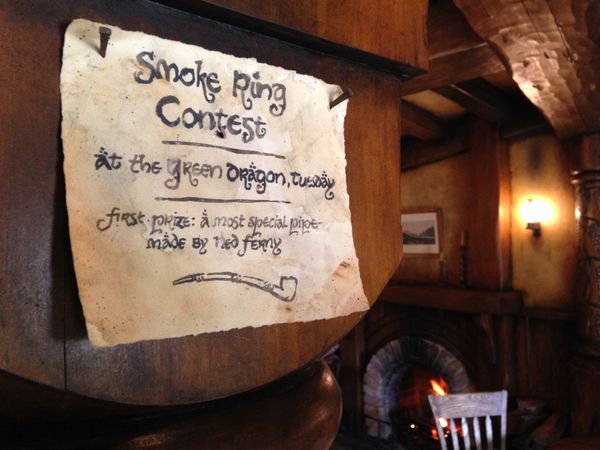 Concluding the tour at the Green Dragon Inn, we were greeted with mugs of cider and the best beer in the Southfarthing.  Brought two of those bad boys home with me to open when I get the call that "There and Back Again" has been picked to be in the Hobbit: Battle of 5 Armies.  So May It Be. 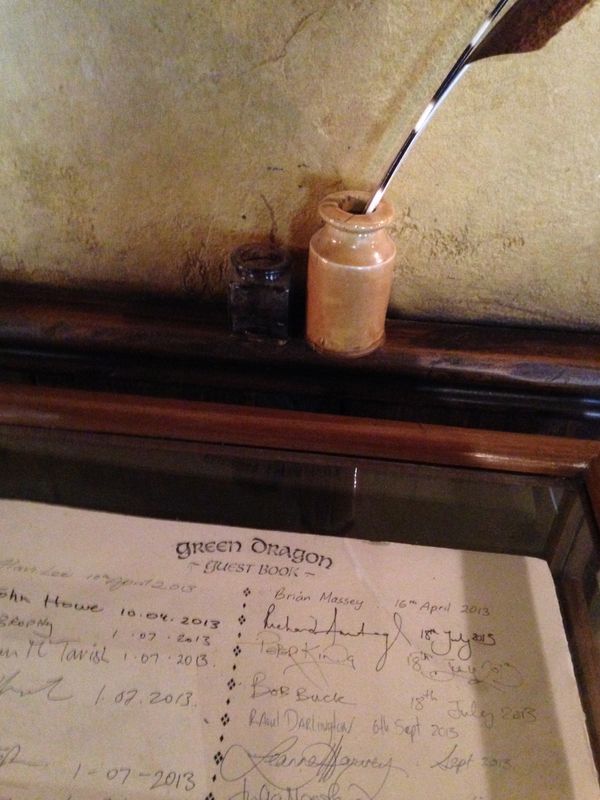 After leaving the Shire, traveling down H1, I came across some very interesting roads... 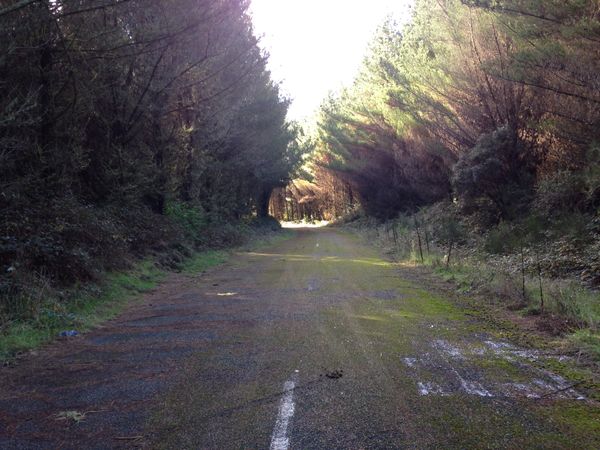 Sadly, there is a huge lumbering industry in NZ and when they replant after clearing, they create these rows.  The sun is nearly blocked entirely under the canopy of these massive pines, so it created paths like this into a black unknown.  Could just imagine a Nazgul riding down these lanes.  Didn't stay long!  =D 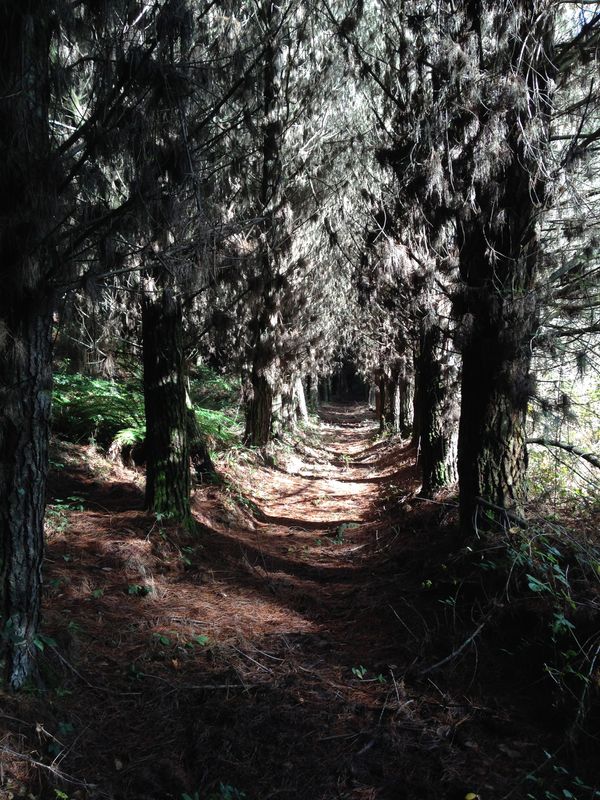 Below is a picture from the trail of the river leading to Huka Falls near Lake Taupo.  Here's a video that best represents the immensity of these falls (https://www.youtube.com/watch?v=jqDdqZ4lWoU).  This was a beautiful walk through the woods on a trail surrounded by giant pines. 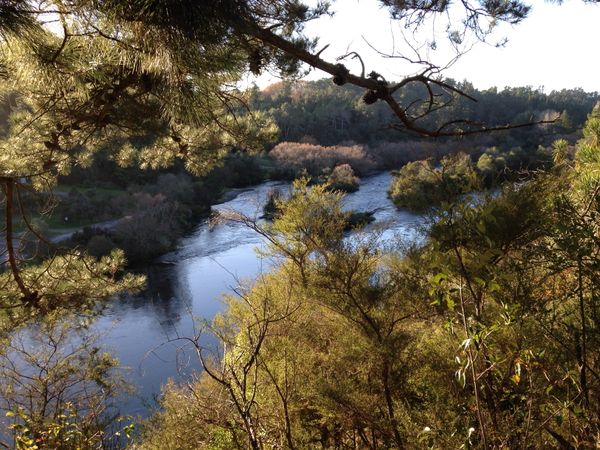 This trek would have been a little better if the softest grass my feet have had the pleasure of knowing all of a sudden didn't change to a gravel trail with an hour left into the hike.  Stopping often to eat from the wild apple trees, I finally made it to the falls close to sunset.  The sound was a choir of angels playing in a speed metal band and the color of the water was this aqua blue velvet Elvis jumpsuit.  Mind totally blown, i begin walking the trail back.  My feet at this point are beginning to puncture open from the gravel, so I begin singing a few mantras i had learned a few earlier in Albuquerque.  As I began singing, all the pain in my feet ceased and all was left was the song, the wind in the trees and the waterfall disappearing in my ears.  I knew the personal mantra given to me at that retreat was powerful, but now I understood.  Music, vibration in harmony with intention has the power to overcome any trial.  I could not help but laugh when I finished a mantra and the pain would return to my feet, yet quickly silenced again in a new mantra.  Reason number 1,342 why I am a musician.  Moving on. 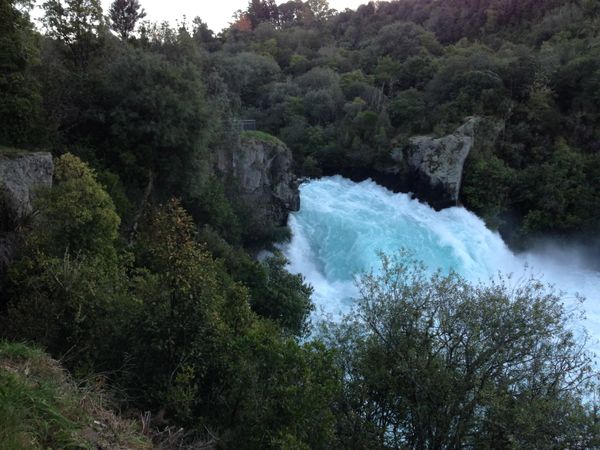 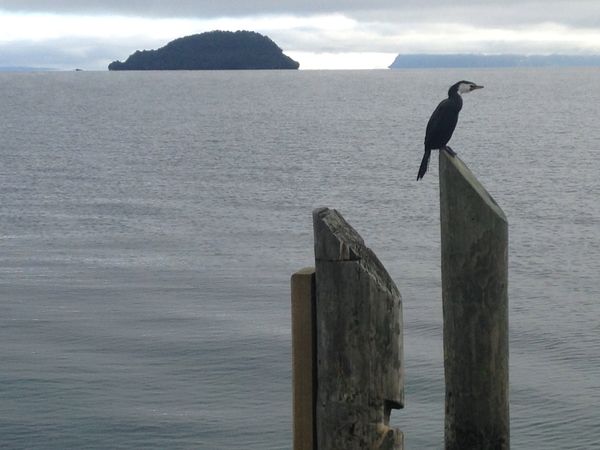 These are the two mountains (Ruapehu and Taranki) I passed after leaving Lake Taupo above or Lake Town as I called it.  This is considered New Zealand's desert.  Oh silly kiwis.  See you in Texas!  Still, utterly breathtaking!  Below the mountain on the right, which I called The Lonely Mountain, but it is actually Mt. Taranaki where they filmed scenes of Mordor.  Yeah, that's Mordor! 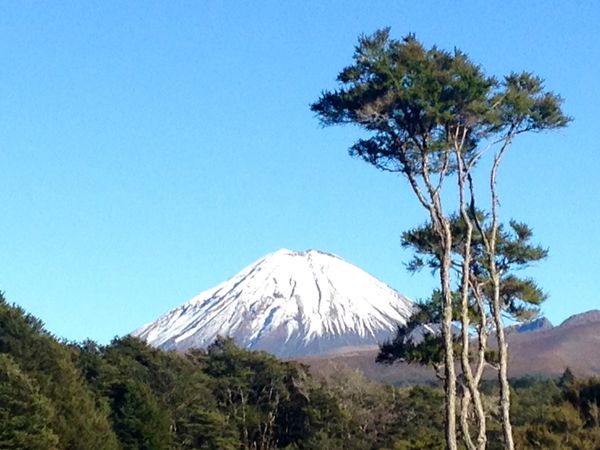 And after spending four days traveling slow in my car, getting out every 5 minutes to allow my mind to be completely blown away by the land that is New Zealand, I reached the pinnacle of my Quest, the post production house for the Hobbit, Park Road Post... 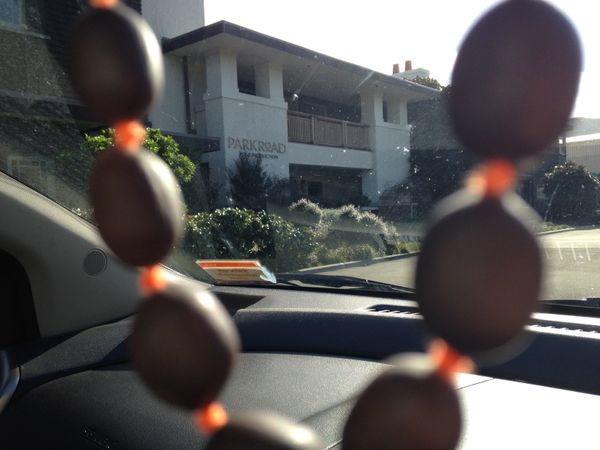 More to come...  Thank you for following me on this journey thus far.  Check out the next blog coming at you soon.  Until then, may your life be filled with joy of your dreams.  Love I you.